History of the Establishment of the Park

The Selangor State Park, or Taman Negeri Selangor, is managed by the Selangor Forestry Department, but involves many other stakeholders. 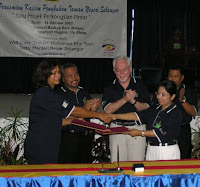 preparing reports and raising funds to support this goal.

The idea to establish the area as a park was first put forward by TrEES to the Selangor State Government in the late 1990's, with the release of the Draft Structure Plans.

In 2005 the 107,000 hectare Park was declared by the Deputy Prime Minister and the Selangor Chief Minister. In 2007, 91,441 hectares of the Park was gazetted under the National Forestry Act, Selangor Enactment, with the promise by the government that the remaining areas, including the Klang Gates Quartz Ridge, would be gazetted in the near future. The Park is managed by the Selangor Forestry Department.

The establishment of the Park was the result of so many people and groups working together with TrEES to make it happen, including Prof Dr. Wong, Dr. Raj, Dr. Yong, Datin P

TrEES continues to lobby for the gazettement of the remaining areas. TrEES is also working hard with the Selangor Forestry Department to help build awareness on the importance of the Park, and for the Park’s sustainable management.