This country's wealth was built largely on the abundant natural resources Malaysia stores - timber and tin, our rich coastline for ports and fishing.

Our country continues to depend on our abundant natural resources to support our economy.  Without the most basic building blocks such as water and biodiversity provided by places like Taman Negeri Selangor we could not enjoy our current lifestyles and grand prosperity.

So this Merdeka Day, remember to say 'Thank you' to the unsung heroes of Malaysia - the forests, rivers, swamps and seas, the plants, animals and insects - the rich natural heritage that makes this country so beautiful and so plentiful!


Posted by Selangor State Park at 7:54 PM No comments:

Site of the Month - the Klang Gates Quartz Ridge

Resembling the back of a dragon, the Klang Gates Quartz Ridge is a world-class geological wonder and a key feature of Taman Negeri Selangor.  It provides a breathtaking backdrop to the northern Klang Valley.

Made up entirely of milky white quartz, it is one of the longest quartz outcrops of its kind in the world, measuring about 14 km above ground and up to 50 metres wide at some points.  It is estimated to be 170 million years old.

The Ridge system is not limited to the rocky whitish body.  It incorporates the side slopes that break from the foot of the exposed body.  The beautiful vegetation along the Ridge is adapted to the harsh, thin and infertile sandy soil weathered from the quartz. 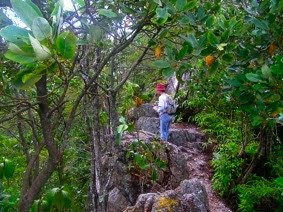 There are 5 species of plants found here that occur nowhere else in the world.  These include the tree Ilex praetermissa, the herb Borreria pilulifera and the grass Eulalia milsumii.  The vegetation is vulnerable to disturbance by small clearings, burning and trampling by visitors who climb the trails along the Ridge.

The Klang Gates Quartz Ridge is also the sanctuary of the serow, the wild mountain goat known as kambing gurun.  The serow also ranges into the adjoining forests, thus requiring a larger area than just the Ridge to survive. 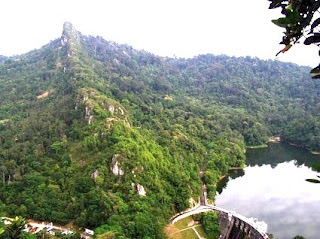 There is a small swimming and picnicking spot at the foot of the dam, at the back end of Taman Melawati.  Sadly, it is not very well maintained but is still very much enjoyed by the local community.  There are also trails which lead up onto the Ridge.  However, the trails are very steep and dangerous, a number of people have died over the years-even experience hikers-while trekking along the Ridge.  If you decide to go, be sure to go with someone who is experienced in hiking the Ridge. 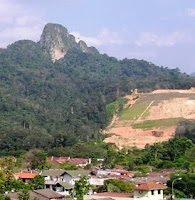 The Ridge is also under threat from the pressure of development, with housing now right up to its foot slopes and the KL Outer Ring Road proposed to run parallel to the Ridge and possibly cut through the Ridge or run behind the Ridge.

The Klang Gates Quartz Ridge is truly a magnificent geological wonder.  It is the key feature of Taman Negeri Selangor and it deserves our respect and our efforts to help protect it!

Please keep this magnificent hallmark of Taman Warisan Negeri Selangor clean!  Do NOT leave ANY LITTER in the Park!

Posted by Selangor State Park at 2:22 AM 5 comments:

The Park that Gives Life to Us All

The Selangor State Park, or Taman Negeri Selangor, protects the forests, rivers and dams that are the source of 98% of the water supply for Selangor, KL and Putrajaya.  Aside from the Park's magical beauty and immense biodiversity, the water supply protected by this Park means that the nation cannot live without this Park.

So the next time you turn on your tap to get a drink of water, or take your bath, or wash your car, please be sure and say 'thank you' to Taman Negeri Selangor - the Park that give life to us all!

Please sign the on-line petition to help protect two critical water catchments in the Park from the threat of the KLORR.  sign the petition

The flyers below give some quick water-saving advice.   You can also visit SOS Selangor for more tips on saving water. 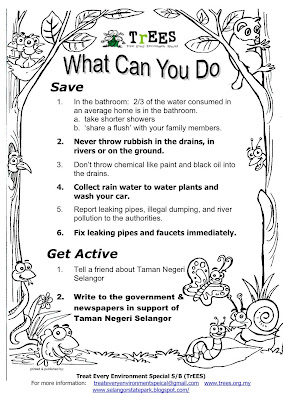 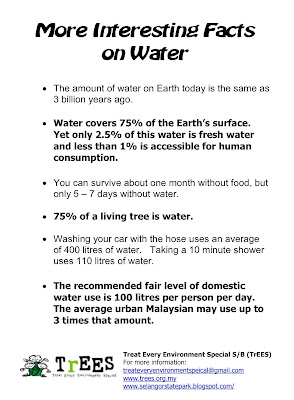 Where's Your Favorite Spot in the Park?

You've read about the Park.  You've seen the list of recreational sites in and around the Park.  Have you been there? 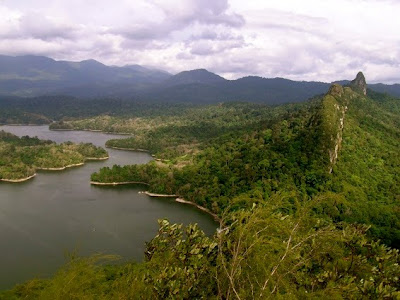 Posted by Selangor State Park at 10:27 PM No comments:

Read more in the Star

Connecting the Community to Taman Negeri Selangor - the Forests that Provide Sustenance to Life in Selangor.

Read more about it here:
article on-line
Posted by Selangor State Park at 6:31 AM No comments: 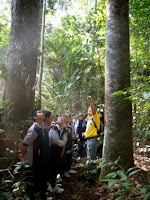 To create a bond between young people and Taman Negeri Selangor, TrEES has initiated a school programme with over 20 schools from Selangor, Putrajaya and KL.

Visiting the Park to experience first hand the beauty of the forests of Taman Negeri Selangor is a very important part of the programme.  TrEES has begun taking students from the participating schools for fieldtrips to Sg. Tekala Recreation Forest, one of the many recreation sites in the Park. 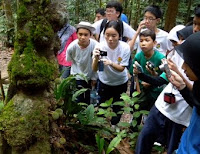 During the fieldtrips, students have a wonderful time exploring the forest, investigating life in the stream, learning the interconnection between species and habitats, and just having a fantastic time splashing in the river.  For so many of the students, it is a rare opportunity that they all truly enjoy. 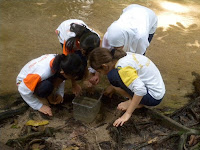 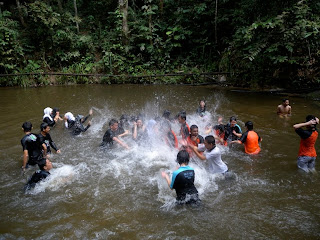 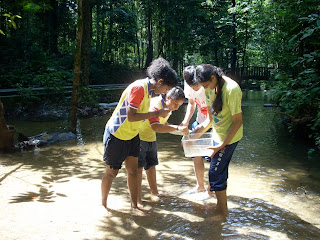 Posted by Selangor State Park at 7:19 AM No comments: