With the World Urban Forum 9 at our doorstep, we must remember that urban areas depend on the rural and natural areas for their sustenance and support.  Help us continue celebrating and conserving Taman Warisan Negeri Selangor!  Do your part by spreading the message and speaking up for the Park ….. 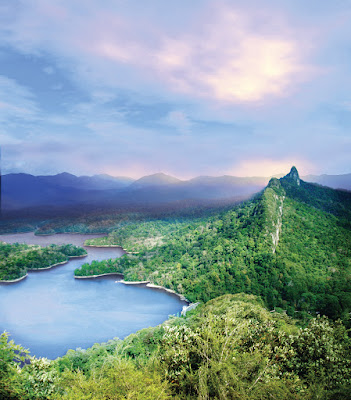 Despite its grand size and stature, many people have not heard of Taman Warisan Negeri Selangor.  The full size of TWNS is 108,000 ha, running from Hulu Bernam at the northern tip of Selangor, down through Ulu Gombak and into Hulu Langat. Established as a ‘state park’ by the Selangor Government in January 2007, the Park’s 10 year anniversary draws to a close this month.

To help bring the 10th anniversary to a roaring close, we’ve put together 10 reasons why you should know and love Taman Warisan Negeri Selangor…

1.      Protecting over 90% of Selangor’s in-state water supply.
Freshwater is one of the most critical natural resource issues facing humankind.  Due to its importance in supporting life and the economy, freshwater has been dubbed ‘the new oil’.  And while human populations and economies are expanding rapidly, the amount of freshwater on the planet is not.  learn more here

Selangor is a microcosm of a world wide problem – rapidly increasing populations utilizing the same finite water resources.  If we do not change the way we manage and protect water, it is expected that Selangor, as well as a number of other states in Malaysia, will be facing high water stress within the next three years. learn more here

The forests of Taman Warisan Negeri Selangor are the source of three major rivers that shape the landscape and history of Selangor and Kuala Lumpur, and are the catchment forests for 5 of the major reservoirs in Selangor – the Sungai Selangor, Batu, Klang Gates, Langat and Semenyih dams.  The Park protects over 90% of Selangor’s in-state water resource, that supply the people of Selangor, Kuala Lumpur and Putrajaya with our daily water supply.

2.      It provides priceless ecological services
If TWNS could send us a bill, we would be in trouble.  The ecological services the Park provides for free to Selangor, KL and Putrajaya should be valued in millions, maybe even billions, of Ringgit.  And it is not just water.  Clean air, climate control, heat reduction and flood mitigation are some of the free services provided by the Park to the 9 million residents of Selangor, KL and Putrajaya and the booming economy of this region. learn more here

Way back in 1997, a team of researchers from the United States, Argentina and the Netherlands put an average price tag of US$33 trillion per year on global fundamental ecosystem services. The amount was nearly double the value of the global gross national product (GNP) for the same period! learn more here

3.      It is home to rich biodiversity
Despite being next to the most developed region in the country, the forests of the Taman Warisan Negeri Selangor are still rich in natural diversity.  The wealth of the Park’s biodiversity contributes to Malaysia’s classification as one of the mega-biodiversity countries in the world.

The forests of the Park are especially important in providing a habitat for our dwindling wildlife including tigers, the animal that graces our national crest, as well as many other endangered and threatened species including pangolin, sunbears, serow (a type of mountain goat), tapirs and our beloved kancil (mousedeer).

The Park is also home to wildlife such as bats that are key pollinators and seed dispersers, important to fruit farms located outside the Park. The Park also abounds with birds and insects.  Many of the recreational sites of the Park are popular birding locations.

There are many unique and wonderful aspects of natural history documented in TWNS, including recent scientific discoveries such as the tree species Vatica yeechongii , which occurs only along a few forest streams, and  an unusual new species of green lacewing, Semachrysa jade sp. n.   learn more here

The Park’s large, contiguous forests provide wildlife and bird species with broad range and habitat, vital to their long-term conservation.

4.      Gombak Selangor Quartz Ridge – icon of the Park
The majestic Gombak Selangor Quartz Ridge is the iconic feature of Taman Warisan Negeri Selangor.  It is believed to be the longest quartz outcrop in the world and is estimated to be about 170 million years old.  It is currently proposed for consideration as a Malaysian Heritage Site as well as a UNESCO Heritage Site by the Selangor State Government. learn more here

Formerly known as Klang Gates Quartz Ridge, and popularly referred to as Bukit Tabur, the ridge has been documented as probably the most unique in Asia or even the whole world.  It runs for more than 14 kilometres above ground.   The ridge includes an unusual vegetation type that is adapted to the harsh, infertile conditions of the quartzite rocks and there are at least 5 endemic species of plants, which means they are only found here and occur nowhere else in the world. learn more here


5.      It is a popular tourism retreat and most of the Park is within 30 min to 2 hours drive from KL centre.
Taman Warisan Negeri Selangor also plays a critical role to over one million annual visitors who enjoy the recreational sites of the Park and the stress relief only nature can provide.  There are at least 14 recreational sites in and around the Park.  If you enjoy the outdoors and picnics by the river, there is a good chance you have already visited Taman Warisan Negeri Selangor and may not have even known it.

Don’t like to leave the comforts of your car?  You may have enjoyed scenic rides through parts of the Park, if you have ever driven from Kuala Kubu Baru to the Gap, or along the Karak Highway before the Genting tunnel, or down to Semenyih dam.

The entire Park is not more than a 2 hours drive from KL.  Some sites, such as Templer’s Park are only half an hour from the centre of KL.  There are several public buses routes that pass by or end at recreational sites in the Park. learn more here

6.      Nature is good for our health
More and more, we are learning how important nature is to our health and overall well being.  How many busy cities can boast cascading waterfalls, forest hikes and hooting gibbons just a few kilometers from their city centre?  Taman Warisan Negeri Selangor is playing an important role in helping to keep our urban population connected to nature, and relieving the stresses of our modern lifestyles. learn more here

7.      You get great exercise and amazing photos and selfies that you can boast about on social media
Taman Warisan Negeri Selangor offers some exciting hiking trails that can really test your endurance.  The 8-hour plus hike to the summit of Gunung Nuang (Nuang Mountain) is considered one of the most challenging mountain hikes in Peninsula Malaysia and is used by many as training for Mount Kinabalu.   The Gombak Selangor Quartz Ridge has become an extremely popular hiking trail with breathtaking views of both the forest and city.  The hike to the Chilling waterfalls crisscrosses the river and takes you to 3 beautiful waterfall sites.  Hike any of these trails, and you’ve earned serious bragging rights as well as numerous opportunities for awesome nature photos and selfies that you can post on your social media pages to make all your friends jealous.

Just remember to care for the nature you are hiking through.  Be careful not to leave any rubbish behind, trample plants or scare the wildlife.  learn more here

8.      It is Part of Our History
Taman Warisan Negeri Selangor contains a lot of our ‘human history’ as well as our natural history.  Ulu Gombak, the Ampang and Hulu Langat forest reserves are among the oldest forest reserves in the country, being gazetted in the early 1900’s.  The Kanching area including the well-known Templer’s Park, is one of Malaysia’s oldest established recreational forests. Sungai Tekala is one of the most visited recreational forests for day trips, in the country. All of these amazing forests are part of Taman Warisan.

Along the Federal Route 55, which traverses the northern region of the Park, is the site where Sir Henry Gurney was killed by communist guerrillas in 1951.   The ruins of a once popular hill station can be found on Bukit Kutu.  The area was bombed by the Japanese during World War 2, and now all that remains are skeletons of the old bungalows.

The Klang Gates Quartz Ridge also acts as a natural barrier for the Klang Gates Dam and water catchment basin.  The dam, completed in 1958, was build within the quartz formation at the small natural opening separating the two main stretches of the ridge.

9.      Its establishment was by the people, for the people
The establishment of Taman Warisan Negeri Selangor was the result of a passionate community effort.  Driving the endeavor more than 10 years ago was the Selangor State Government working in partnership with Treat Every Environment Special (TrEES), a local environment NGO.  Together they undertook the ‘Project Towards the Establishment of the Selangor State Park’ back in 2003, which ultimately lead to the Park’s declaration in 2005 and gazettement in 2007.  While they were the main catalysts, it was truly a community effort, with resident groups, nature lovers and other NGOs all working together to make Taman Warisan Negeri Selangor a reality.  learn more here and here

It was actually quite forward thinking of the government, NGOs and people of Selangor to work to protect this catchment forest and recognize its importance by gazetting it as a ‘state park’. International studies have demonstrated that major urban areas should focus efforts and funds on conserving forests that supply and purify their drinking water, as it can save cities billions of dollars. Taman Warisan Negeri Selangor is an investment in our future. Way to go, Selangor!  Learn more here

10.      If you don’t, who will?!
The Park’s close proximity to nation’s capital also places tremendous pressure on it. The conservation and sustainable management of Taman Warisan Negeri Selangor is  challenged by issues such high numbers of visitors and unregulated tourism, pollution, demand for water, disposal of rubbish, poaching and forest fragmentation. These issues are taking a heavy toll on wildlife populations, the health of the forest overall, and the ability of the Park to serve its ecological functions including its role as a pristine water catchment area.

While we celebrate the Park’s 10-year anniversary, both the community and government need to continue work together to ensure the conservation of Taman Warisan Negeri Selangor.  With all the services it provides, TWNS plays a vital role in protecting our quality of life.   Help celebrate the 10th anniversary of the Park by being active in its protection:  get out and enjoy Taman Warisan Negeri Selangor and give back by keeping it clean and speaking up for the forests.

For more information on Taman Warisan Negeri Selangor, or to share your experiences and photos of the Park, please visit:
http://trees.org.my/
www.facebook.com/SelangorStatePark/

About Treat Every Environment Special (TrEES):
Established in 1995, TrEES promotes environmentally sustainable lifestyles in Malaysia. TrEES has over twenty-one years of experience working on environmental conservation programmes.  We partner with groups and communities to develop programmes that empower people to become actively involved in conserving the environment. Our past projects have covered areas in conservation including the establishment of Taman Warisan Negeri Selangor, waste management programmes and environmental education within schools.