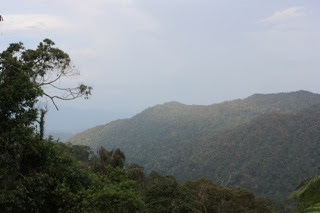 Many people don't realize it, but the forests in the Selangor section of Fraser’s Hill, and along the road that winds up to the hill resort, are part of Taman Negeri Selangor.

It’s nicest to begin the experience from Kuala Kubu Bharu, a quaint government town that shouldn’t be missed on the way up to Fraser’s Hill.  Of course, KKB is not part of the Park, but it is lovely town that borders the Park, and is full of old buildings and history. 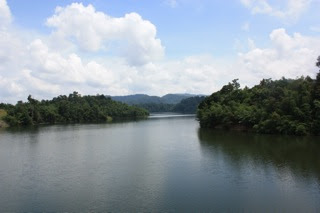 From KKB, you take the E55.  Driving up this windy road, you pass the Sungai Selangor dam. The Sungai Selangor reservoir is the largest supply of freshwater to residents in Selangor.  Completed in 2002, construction of dam itself was hotly protested, due to the rich forest, and community lands the reservoir inundated.  Now, as you drive along the road, it almost seems as if the dam always existed.

After the Sg. Selangor Dam, the road enters the forests of Taman Negeri Selangor.  These forests play a critical role as water catchment for the reservoir.   To the left and right you can see beautiful forest trees, which comprise the species-rich dipterocarp forests on hilly and mountainous terrain.  These area of the Park tends to be steep slopes of more than 45 degrees, and there is a general decline in the number of dipterocarps and an increase in non-dipterocarps such as Fagaceae, or commonly known as oaks, as you drive further up into the hills. 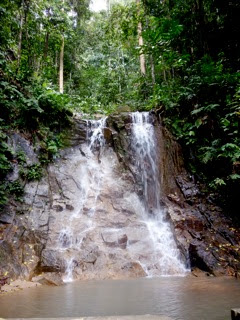 About half way through the journey you can take a break at the Sg. Semangkok Forest Recreation site.  It is a small waterfall and picnic area that is just at the road side, so there is no long walk to find the waterfall!  It can make for a nice place to take a few photos and stretch your legs.

Continuing on in the journey, you pass a small signboard that marks the site where the British High Commissioner in Malaya, Sir Henry Gurney, and his motorcade was ambushed by communists in 1951.  Thirteen British soldiers along with Sir Henry were killed in the attack. 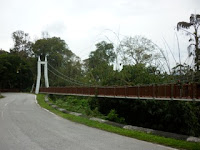 The Gap, a famous place to rest just before you make the final assent to Fraser’s Hill Resort, is sadly in a bad state.  It was closed down a few years ago.  According to the work sign, it was closed for restoration and renovation, but this seems to have been totally abandoned, and the old rest-house is deteriorating into quite an eye-soar.  On the opposite side of the road, a grand walking bridge was constructed.  Perhaps all the money for the renovations went into the bridge! While the bridge was recently completed, panels along parts of the side rails are already falling off, sad to say.

The Gap and Fraser’s Hill have always been popular places for birder watchers.  Bird species include six species of hornbill and the Great Argus Pheasant.   In the upper parts of the hill forests and lower montane forests, the giant fishtail palm Caryota maxima and the giant rattan Plectocomia griffithii create impressive sites.

The Gap road borders along the Fraser’s Hill Wildlife Reserve.  With the declaration of the gazettement of Taman Negeri Selangor, the forests of the wildlife reserve is now also gazetted as permanent forest reserve classified as part of the State Park. 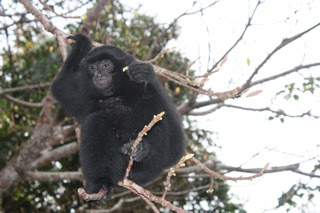 The lower montane forests below and around Fraser’s Hill are rich in both plant and animal species.  One unusual plant species is the climbing bamboo Maclurochloa montana, and it is known only from a few sites in Peninsula Malaysia.  Wildlife in the Park around the Fraser's Hill area includes three species of gibbon, flying lemurs, slow loris.

In Fraser’s Hill itself, there are a number of great nature walks, fun activities, as well as just simply strolling along the sidewalks in the cool air, that make this spot a fun and refreshing break from the city.  On the Selangor side, you can stay at the Selangor Bungalow.  The Kindersley Trail also starts from the Selangor side, near the Methodist bungalow.

So the next time you need an overnight break from the city, drive up to Fraser’s Hill and experience the magnificence of Taman Negeri Selangor along the way!