This is an inspiring story of how young people are trying to make a difference in their community. 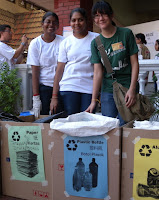 TrEES was approached by the Dhammaduta Youth group (D2Y) from the Buddhist Maha Vihara to help make this year’s Wesak Day more green.  Every year during this religious festival, over 20,000 devotees visit the temple in Brickfields.  And wherever big crowds gather, you can also expect a large amount of rubbish to follow.
The D2Y wanted to prevent the waste generated during the festival from simply going to the landfill.   To keep the greening manageable, it was decided to focus on the rubbish generated, and that was a huge task in itself.
Also joining in the greening efforts was the organization Khatulistiwa.  With their Sampah Masyarkat programme, Khatulistiwa brought their knowledge and experience gained through their work during the Thaipusam festival at Batu Caves. 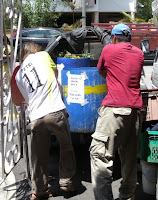 During the preparations leading up to the festival, volunteers at the temple were very cooperative in ensuring that all vegetable scraps from the food preparations were separated.  A bin to collect left over food waste was also put out at the volunteer’s eating area on Wesak day itself.  The food waste, together with the vegetable scraps were sent to a local organic farm for composting, after the festival began to wind down. 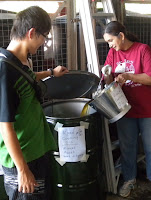 Most of the carton boxes used for the delivery of goods, including candles and drinks, were kept aside for the recycling efforts.  The used oil from cooking as well as oil used for the oil lamps were collected and stored in drums.  The oil was later sent for reprocessing into biodiesel. 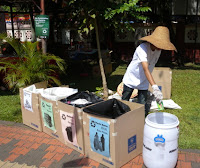 Dealing with the public is not an easy task.  But we were very pleased to see the cooperation and willingness to participate from people of all ages.  For the public that was unfamiliar with recycling, D2Y volunteers were stationed at each set of recycling-rubbish bins, to help the public put the proper item into the proper bin.
With the close of the festival, over 3 lorry loads consisting of plastic bottles, tetrapak, carton boxes, oil and organic waste was saved from the landfill and sent for better use through recycling and composting.   TrEES looks forward to working with the D2Y youth in this greening challenge again next year!
Every time we reduce, re-use and recycle our waste, we are helping to protect Taman Negeri Selangor and the environment in general.  By saving valuable resources and reducing the filling of landfills, we help to protect our forests and other natural areas.
Do YOU have an inspiring story to share?  Send us an email at treateveryenvironmentspecial@gmail.com
Posted by Selangor State Park at 4:38 AM