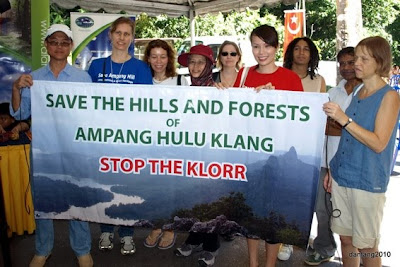 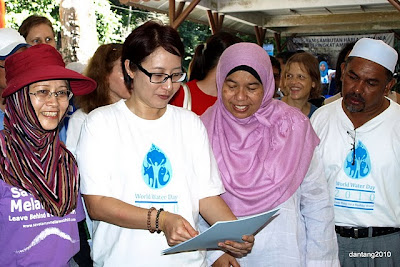 In the Draft Local Plans for Ampang Jaya 2020, the alignment of the proposed KLORR is shown to cut through the middle of the Klang Gates Quartz Ridge and the Ampang Forest Reserve (see attached map). Both of these areas are a part of the 108,000 hectares declared as the Selangor State Park by the Selangor State Government, back in August 2005. The KLORR is also shown to cut through the back of Taman Melawati. The Local Plan also highlights the fact that the Klang Gates Quartz Ridge is a unique geological monument, and refers to the Selangor State Park, particularly the forests of Ampang, as important environmental areas.
Resident and NGO groups are concerned that the fragmentation of Selangor’s priceless geological monument, the Klang Gates Quartz Ridge, as well as the Ampang Forest Reserve, will dramatically impact the Selangor State Park, the forest that protects the water resources of the state and federal territories. The groups are also concerned that the KLORR will adversely affect the quiet residences of Taman Melawati, creating a safety threat, traffic and pollution problems.
In the memorandum, the groups highlight 5 key points of concern relating to the proposed KLORR. Among the points include the Selangor State Government should maintain its commitment to sustainable development and uphold the importance and integrity of the Selangor State Park.
Another key point was the impact on residents living in Taman Melawati. Signatories highlight that in the Local Plan, the KLORR passes very close to the Klang Gates Dam, which was built nearly 60 years ago. The groups are worried that given the past history of highway cracks in the MMR2, the number of landslides in the Ampang region, and other building catastrophies across the country, the residents of Taman Melawati actually fear for their safety if anything should happen to the structural integrity of the dam and that the entire township could be flooded.
The memorandum emphasizes the need to adhere to Selangor Agenda 21, and be inclusive of residents’ feedback and input in local planning. Signatories express concern that community feedback sought by the government during the development of the Local Plans appears to be for documentation purposes only and seems to have been disregarded in the actual planning, as many of the signatories had objected to the alignment of the KLORR when it appeared in the Draft Structure Plan for Ampang Jaya in the late 1990’s.
The groups also note that constructing the highway in an Environmentally Sensitive Area (ESA) that has already been declared as a Park, is a contradiction in planning.
In the memorandum, the groups acknowledge the need to alleviate the increasing traffic pressure on the Middle Ring Road-Jalan Hulu Kelang. However, the groups state that to simply continue constructing highways is not a sustainable solution to the problem and that there is an urgent need for an integrated public transport system in the Klang Valley.
Given the understanding that the KLORR is a federal project, the groups request that the Selangor State Government work together with the Federal Government to stop the destruction of the Klang Gates Quartz Ridge and the Selangor State Park as a whole, and to uphold the quality of life for residents in Taman Melawati. Signatories are asking all the branches of the government involved in the project to find a more viable solution that is in line with the concerns of the residents throughout the state.
Posted by Selangor State Park at 3:13 AM