A new species of insect has been recently discovered in Taman Warisan Negeri Selangor ().  How exciting! 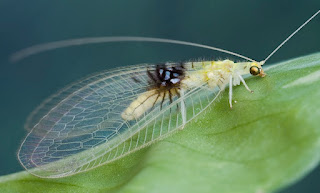 An extract of the finding:

An unusual new species of green lacewing (Neuroptera: Chrysopidae: Semachrysa jade sp. n.) is described from Selangor (in the ) as a joint discovery by citizen scientist and professional taxonomists. The incidental nature of this discovery is underscored by the fact that the species was initially photographed and then released, with images subsequently posted to an online image database. It was not until the images in the database were randomly examined by the professional taxonomists that it was determined that the species was in fact new. A subsequent specimen was collected at the same locality

Green lacewings are the second largest family of lacewings, with more than 1200 species in approximately 80 valid genera distributed in all major biogeographical regions worldwide (Brooks and Barnard 1990).

The insect was originally photographed and released and was a female Semachrysa jade sp. n. female habitus. The forewing length was15.0 mm.  It was photographed by Guek Hock Ping.