Species of the Month - the Malayan Tiger 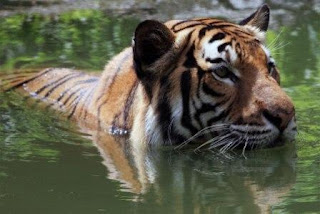 The Malayan tiger population is under serious threat in Malaysia, and it is listed as Critically Endangered under IUCN.

Poaching along with forest fragmentation and habitat loss are major factors in this drastic population decline.

The world over, there are estimated to be only 3,000 – 4,000 wild tigers, with half of them found in India.  In fact, there are less tigers in the wild than there are in zoos in the U.S.

While Malaysia and other tiger countries around the world are trying to increase the tiger population – with world wide aim of 6,000 wild tigers by 2020, with the threat of poaching and forest loss so strong, it is unlikely the tiger populations will even be able to maintain their current numbers, let alone increase. 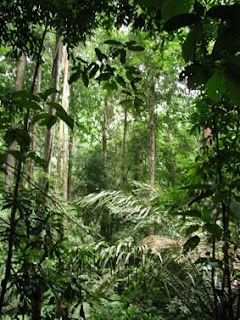 While powerful creatures and stealthy hunters, tigers instinctively try to avoid humans and will only attack people if they are provoked, injured or unable to hunt their usual food. The Malayan tiger is found in  Peninsula Malaysia and southern Thailand.

Tigers are carnivores, with their favourite prey being wild boar and deer.  They are solitary creatures except during mating time, or as a mother with young cubs.  They are extremely territorial, and a male tiger may roam a territory more than 50 sq km while a female may have a territory of about 20 sq km.  No two tigers have the same stripe pattern.

In Peninsula Malaysia, tigers prefer the lowland dipterocarp forests as their primary habitat, which is the main forest type of Taman Warisan Negeri Selangor.

The Malayan tiger may roam in and out of the Park, in search of food.  With the tiger sightings around the Fraser's Hill area in 2005,  the northern forests of Taman Warisan Negeri Selangor have been classified as tiger habitat under the Selangor Structure Plan.  Tigers may also roam in and out of other sections of the Park, particularly the large tracts of forest, including the Hulu Langat area in the south.

Tigers cannot speak for themselves.  They cannot ask for help, for better protection from the government.  We have to do that for them.

You can help protect the Malayan tiger and other threatened species.
• Don’t buy products or medicines made from wild animals
• Reduce your consumption habits
• Speak up for the protection of forests and wildlife

If you seen any one selling wild animals or parts of wild animals, please call the Department of Wildlife and National Park (DWNP) immediately at 1-800-88-5151 or  03-9086 6800 (office hours).  Please write letters to the government and articles to the newspapers to express your concern over the illegal trade in wildlife.

Every little bit you do makes a big difference!

To learn more about efforts to protect our magnificent Malayan tiger, please visit:
Tx2 - Double the Number of Tigers